Vancouver, British Columbia: Alset Minerals Corp. (TSXV: ION) (“Alset” or “the Company”) is pleased to report that the phase one drilling program at La Salada salar in Zacatecas, Mexico has been completed. This is the first of 13 salars that will be tested. Alset has a 100% interest in 13 salars covering an area of approximately 4,500 hectares, all within 100 kilometres of the city of Zacatecas.
Highlights of Drilling
Grid completed over La Salada salar with 1 deep hole (see Company news release dated 15 May 2017) and 40 auger holes over the majority of known surface salar extent;38 brine and 428 soil samples recovered;High of 27,300 mg/L potassium (K) in near surface brine with an average of 12,718 mg/L;High of 40,000 mg/L sulphate (SO4) in near surface brine with an average of 16,594 mg/L;High of 1,860 ppm lithium (Li) in soil with an average of 724 ppm;High of 6.45% of potassium (K) in soil with an average of 3.73%;Low exploration costs due to infrastructure (roads and power) around the La Salada salar.
Allan Barry Laboucan, President and CEO of Alset said: “This program at La Salada was the first chance for Alset to carry out a significant drill program to get a better understanding of the chemical compositions in the near surface brines as well as soils down to an average of 14 metres. An important attribute of our salars that became very clear was the cost of exploration compared to similar work in remote locations. We are experiencing the benefits of good roads and power that will continue to enhance the project as we move forward to do more testing to better understand the potential of La Salada and our other salars. In the event of a mine being built the infrastructure will continue to enhance the economic potential.
Based on these results, we are now ready to move forward with metallurgical work to understand the leaching characteristics of the soils and to further explore for brine and aquifer potential at depth. In addition to the work completed at La Salada, we completed a first pass auger sampling program over Santa Clara, Saldivar, Caliguey, Colorada, Chapalla salars and some of our recently acquired salars. Those samples results are currently pending; we hope to report them in the next few weeks.
The brine results showing high potassium, high sulphate, low calcium and low magnesium suggest the possibility of producing potassium salts at La Salada using solar evaporation. We have an outstanding salar at La Salada that is showing a lot of potential for significant resources of lithium, potassium and other minerals needed for farming.”
Tables showing the soil and brine results mentioned in this news release are given below. The complete data set for this work and our past lab work can be found on Alset’s corporate website in the lab results section. 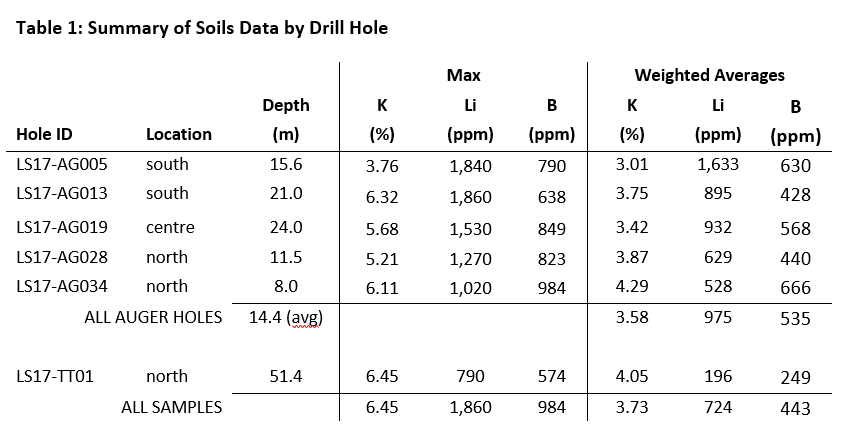 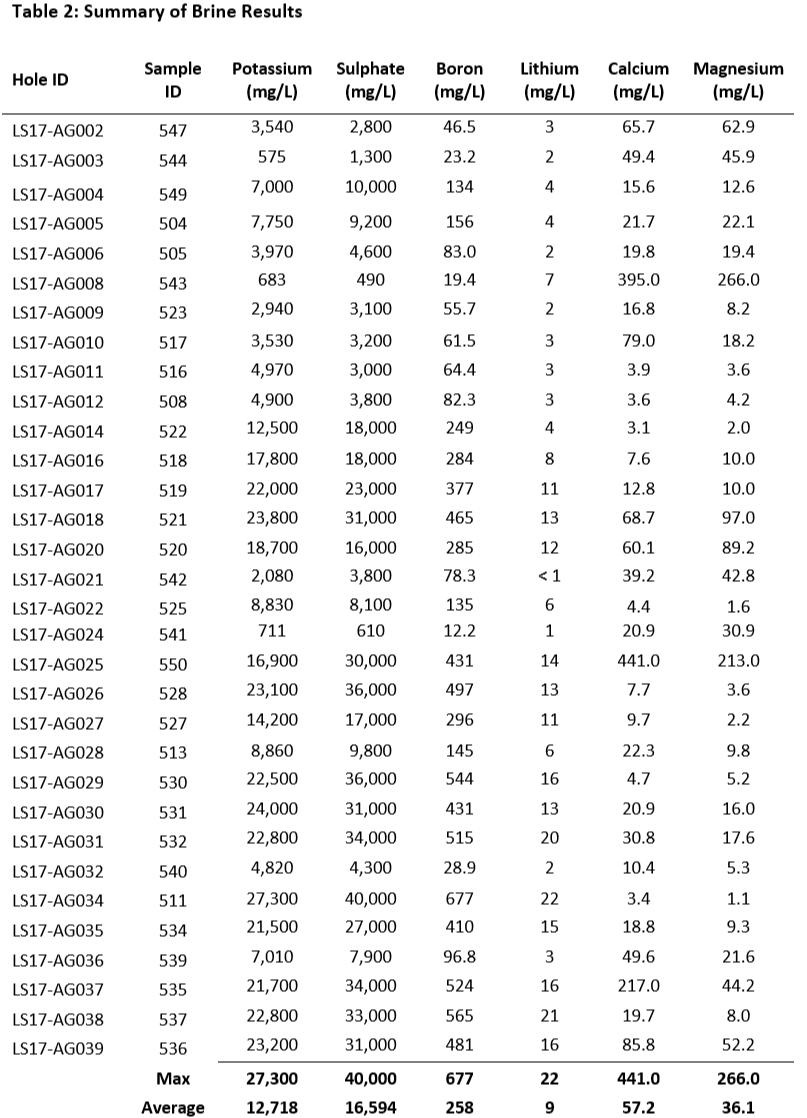